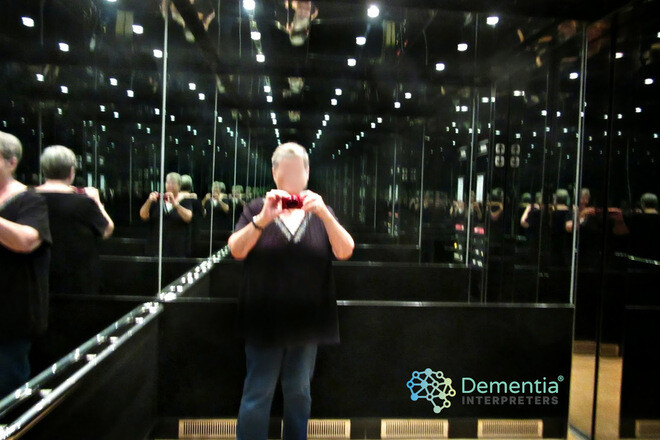 Now is the perfect time to understand how the environment speaks to people who have dementia.

Now is the perfect time to understand how the environment speaks to people who have dementia.

Why do care providers continue to put mirrors in lifts in environments where people with dementia live? Is it for aesthetics? is it because mirrors are expected to be in lifts? Is it because the person who designed the environment designed it from what they think it should they would like rather then looking from person who has dementia's point of view?

Is it time that care environments that have mirrors in their lifts where people with dementia live or visit are forced to remove them?

People and organisations that support people who have dementia need to understand the 'Language of Dementia' which isn't solely about speech and communication but also what the environment, food, uniforms, menus and so much more 'says' to a person who has dementia. To start to learn this, you need to take the Dementia Interpreters Course and start to learn how to translate these new forms of communication.

To understand why mirrored lifts are an issue within dementia care, we first need to understand why they have been hung in lifts in the first place. Originally lifts were designed for high rise buildings and were very slow which meant that people with a fear of heights or small spaces would have a fear of using them. They tried to speed lifts, however technology wasn't so advanced and this caused noise, vibration and other fear generators. They tried many things, however placing a mirror in a lift 'distracted' passengers by allowing them to check their hair, clothes, posture and other things. This meant that time in the lift seemed faster and therefore people were more likely to use the lifts. Today, technology means that lifts are faster, safer quieter and by using different materials they are much lighter. So why do we need mirrors today?

Care facilities and hospitals across the world have seen the impact that mirrors can cause for a percentage of people who have certain forms of dementia. Anyone working in dementia care have seen people talking to a reflection in a mirror or even a window. For most, this will not have a dramatic effect, however for a good proportion of these people they will develop a paranoia and fear of these reflections. Some say that these reflections in the windows in the evening as darkness falls is one of the causes of a condition called sundowning. These fears of reflections have caused some people with dementia to break mirrors or demonstrate negative behaviour to the person within the mirror. We then need to add facial agnosia into the equation and realise that some people who have dementia will not even recognise their own image when they see their reflection.

Pre-Covid, what did you feel when you went in a lift which has strangers that you didn't know in it? Did you feel anxious, weary, nervous and just wanted to get out as soon as possible? We have all had some negative feelings in this situation, so now imagine you had dementia and were surrounded by people you didn't recognise that were actually just reflections but real to you. 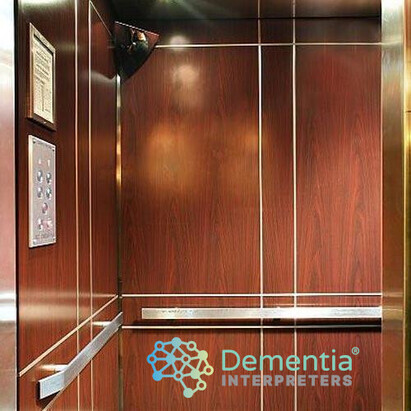 Lifts do not have to have mirrors and removing them gives you the opportunity to add murals or maybe pictures that are made for people who have dementia. Always ensure that lighting is as high quality as possible and maybe try SAD (Seasonal Affective Disorder) and this will help combat the risk of falls.